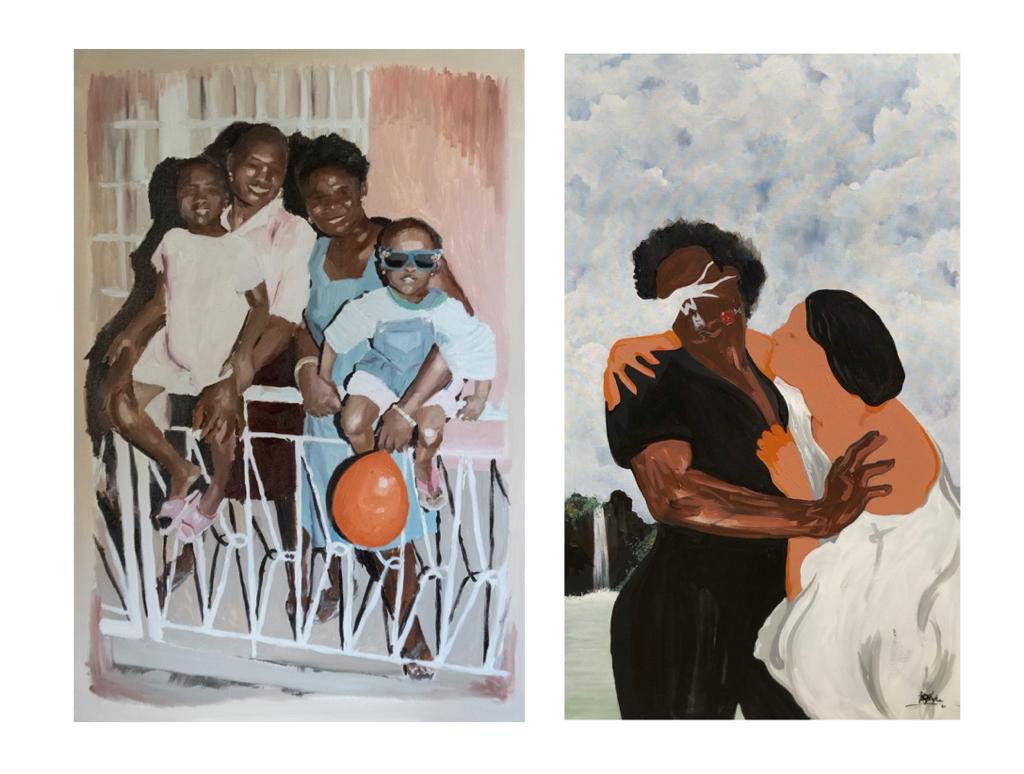 Affinity Art Gallery is pleased to present Coalesce: a duo exhibition by two contemporary African artists whose works exist in the space between realism, figurative and abstract expressionism.

COALESCE is a duo exhibition of paintings by two emerging contemporary Nigerian artists, Damilola Onosowobo Marcus and Daniel Pengrapher Oshundaro, whose works exist between realism, figurative and abstract expressionism. The word Coalesce means to unite, to come together, or to form a whole. This definition creates the starting point for the exhibition.

Contextualising Coalesce within the pathway of time alerts the viewer to the construct’s transience and focuses on drawing out the strains between isolation and contact. The artists explore themes around Solitude, Isolation, Rest and contemplating the simplicity and complexity present in these themes. Recently, conversations about time have dominated discussions within our communities, centered around the context of what is familiar and new.

In Damilola Onosowobo Marcus’s “untitled” series, she references memory and personal history, highlighting significant moments in her childhood that evoke nostalgic emotions. Her storytelling conveys message about personal identity derived from memories of comfort and nostalgia. She explores the liminal space between ambiguity and commonality of objects; in the same way, memories push the limit between something that is and something that is not.

The elements of pop-art and realism are infused in the paintings; the presence of commonplace objects is seen both emphatically and objectively, without praise or judgment but with overwhelming familiarity. The paintings feature relatable and familiar characters, settings and plots centered around her childhood with the intent of presenting this body of works to tell a story as truthfully and realistically as possible without dramatizing or excessively romanticizing it. As a result, the works are autobiographical and depict real-life circumstances.

Damilola’s work reconsiders documentation of events and the examination of how they can be presented. It is a debate regarding the domain of memory and that of experience. To further reference a sense of time and place, the paintings incorporate architectural elements such as metal balcony railings, entryways, concrete fences, and furniture reminiscent of Nigeria in the early 1990s. These objects often speak of a different time and a simpler life, one which is not evident today. Her works are done primarily in oil and may appear simple; however, there is an apparent complexity in composition achieved through overlapping techniques.

Daniel Pengrapher Oshundaro’s body of work is a homage to the classical art movement of the 17th century. The paintings are steeped in symbolism with an intimate and vulnerable approach to their execution. Also influenced by expressionism, the colours on his canvases are heavily applied and layered. His works are characterized by freehand brushwork featuring vigorous outlines, elaborate scenes, and flattened-out figures with bold expressions.

In this body of work, some paintings show heavily clouded scenes where the subjects seem to have been blindfolded by the moving cloud with features barely visible. In contrast, others are meticulous paintings with controlled composition, characterized by fine brushwork focusing on details often left naturally unfinished or with a clear finish. Some works focus on painting elements like clouds, flowers and vegetation, mountains and rivers, while other works portray people as their subjects.

In his painting ‘DayDreamer’, the use of tropes is subtle, which is significant to Daniel Pengrapher’s painting style. The introduction of the cock is deliberate as it represents the concept of time and is a part of his cultural confidence.

Encountering the work of Daniel Pengrapher is a peculiar, unsettling experience in which the viewer intrudes into a space and a moment to which they are alien yet familiar. There is a strong presence of duality and contradiction, sensuality and spirituality, thinking and feeling, light and dark, transitory and timeless; these are the opposite poles that inform his compositions and our existence.

Created during this period of unprecedented uncertainty and vulnerability, this selection of works reveals both artists’ ability to draw from a nexus of ideas to produce a distinctive and experiential body of works. The exhibition boldly examines the fusion of private and public memories, challenging the human mind’s capacity to recollect and remember experiences.