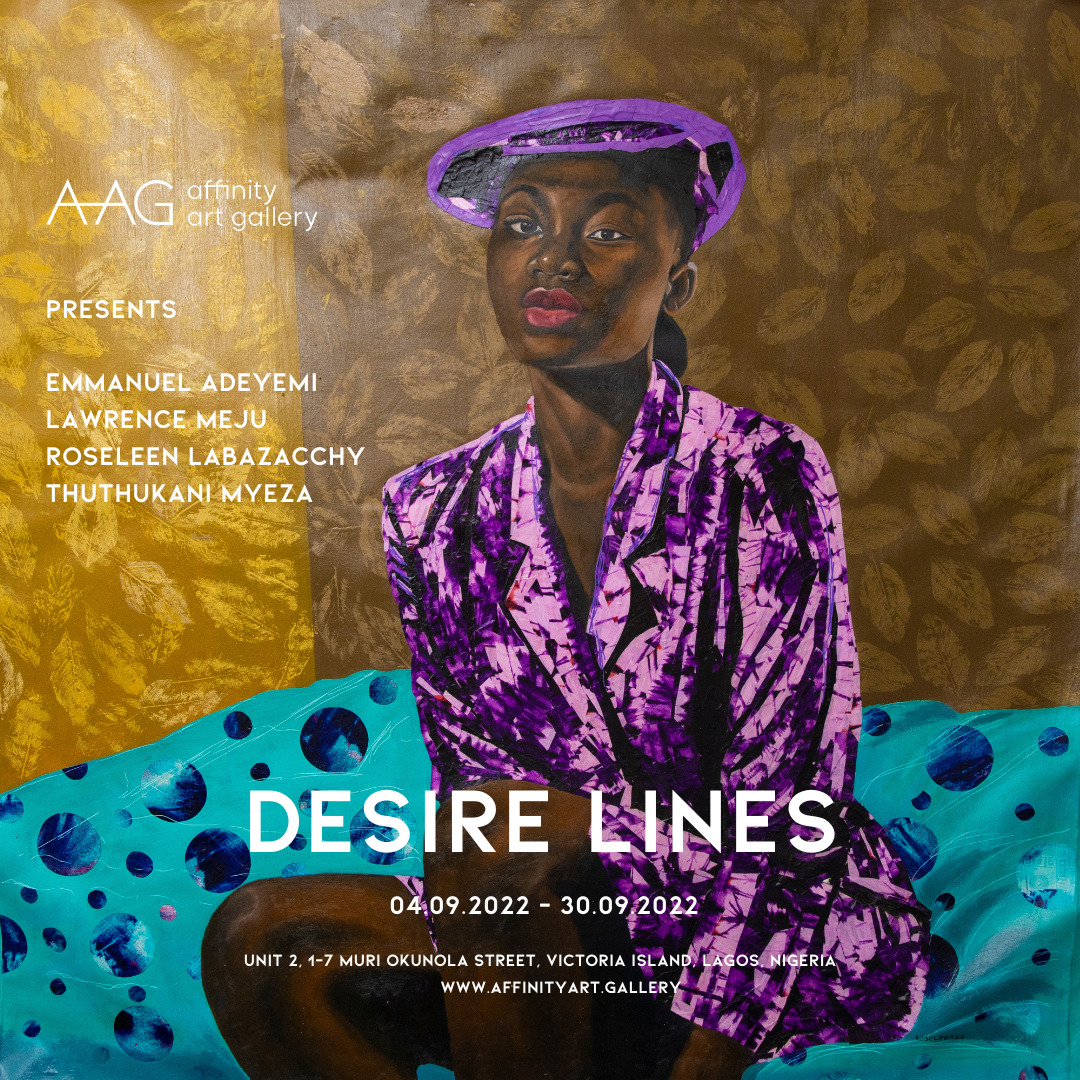 1. an unplanned route or path (such as one worn into a grassy surface by repeated foot traffic) that is used by pedestrians in preference to or in the absence of a designated alternative (such as a paved pathway)

2. ‘A desire path is a path that is formed when people choose not to use the path that you have paved for them. It’s the shortest or otherwise most convenient way for them to get from point A to point B.’ – Jussi Ahola (2013)

It is human nature to wonder about the ‘road not taken’. The paths we could have taken but chose not to for reasons that seemed valid at the time but upon reflection might seem less so in the present. The works in this exhibition explore the concept of what it means to take that road and the myriad outcomes that could be awaiting on the other side. They implore us to notice that path on the side, to pay attention to the narrow road with the rough edges, to hone in on the barely visible route with very few people on it. Indeed desire lines mandate that we be in tune with ourselves and our environment, if not how do we even know they are there? Humanity and evolution have come so far with wonders in industry, technology and science but these artists argue that along the way we may have lost some things that are crucial to our humanity as individuals and as a collective and one of the ways to regain that humanity is to step out of the way.

Lawrence Meju’s works invite the viewer to a place of introspection where we explore our “mindscape”, face all our emotions and who we are head-on, and in doing so reconnect to our true selves. How can something so simple seem so radical? Because it means a return to basics, without any of the extra comforts we tend to clutch tightly between our fingers. It implies a nakedness, a word that many will shy away from. Meanwhile his technique is a rejection of the ‘rules’ and principles of hyper-realism and instead distills the human form down to its bare essentials without sacrificing beauty, connection and meaning. His painstaking method of documenting, sketching, cutting, measuring and pasting the paper he uses in his works, an ode to his architectural background, are a testament to the process of creating, much like the internal work we must complete to achieve full self-realization.

Emmanuel Adeyemi’s works are about tapping into our subconscious by connecting with nature and the universe around us. He argues that only when we tune into that frequency, can we truly achieve peace and harmony in the world and within ourselves. He urges the viewer to look beyond the surface. He believes that the disharmony in the world is caused by our ignorance to the fact that we are layered beings. Once we are able to unite within ourselves, that unity will be reflected in the world. His process of cutting up foam into tiny pieces that ultimately become part of his large paintings, further the idea that to build, we must first break down.

Thuthukani Myeza’s works are about the power of the narrative. Who is telling the story? What perspective are they telling it from? What context are they situating it in? He has seized the reins of power to tell our own stories, the stories of the people. Some of his works involve a re-telling of stories that have been told before, but now with more nuance and space for different truths. He takes us to the past, forging his own path, while also making sure to lead us back to the present. His works redraw the lines and boundaries of what we have accepted as fact and truth with the words he juxtaposes in his images prompting the viewer to ask questions about their history and reality.

Roseleen Labazacchy largely focuses on a single major message with her works; and that is the glorification of the African woman. Not by others, but by herself. Her works depict African women in bold colors, sometimes militant, sometimes defiant, sometimes peaceful but at all times self-assured. African women as they say are the blueprint, and she never wants her audience to forget it, hoping that that knowledge will spawn an awakening of confidence in the women who come across her work. She uses fabric, some of which she dyes herself, to signify the uniqueness of her subjects. Her works are a call to remembrance of the stories of the African women in history, the ones whispered and sung of in folklore and songs, the warriors, the matriarchs, the deities and the Queens and kingmakers of whom they are descended from.

These works play with the concept of our individual and collective knowledge, and the connections that we all share as a result of being human. They invite us to look a little closer, dig a little deeper, ask questions of ourselves and the world around us and be open to the answers we receive. They remind us that this is how it has always been, how it was always meant to be, from the beginning. Finally, they present an almost irresistible allure to take a step off the beaten path, followed by another and another.


Two roads diverged in a yellow wood,
And sorry I could not travel both
And be one traveller, long I stood
And looked down one as far as I could
To where it bent in the undergrowth;

Then took the other, as just as fair,
And having perhaps the better claim,
Because it was grassy and wanted wear;
Though as for that the passing there
Had worn them really about the same, (Frost, 2015)