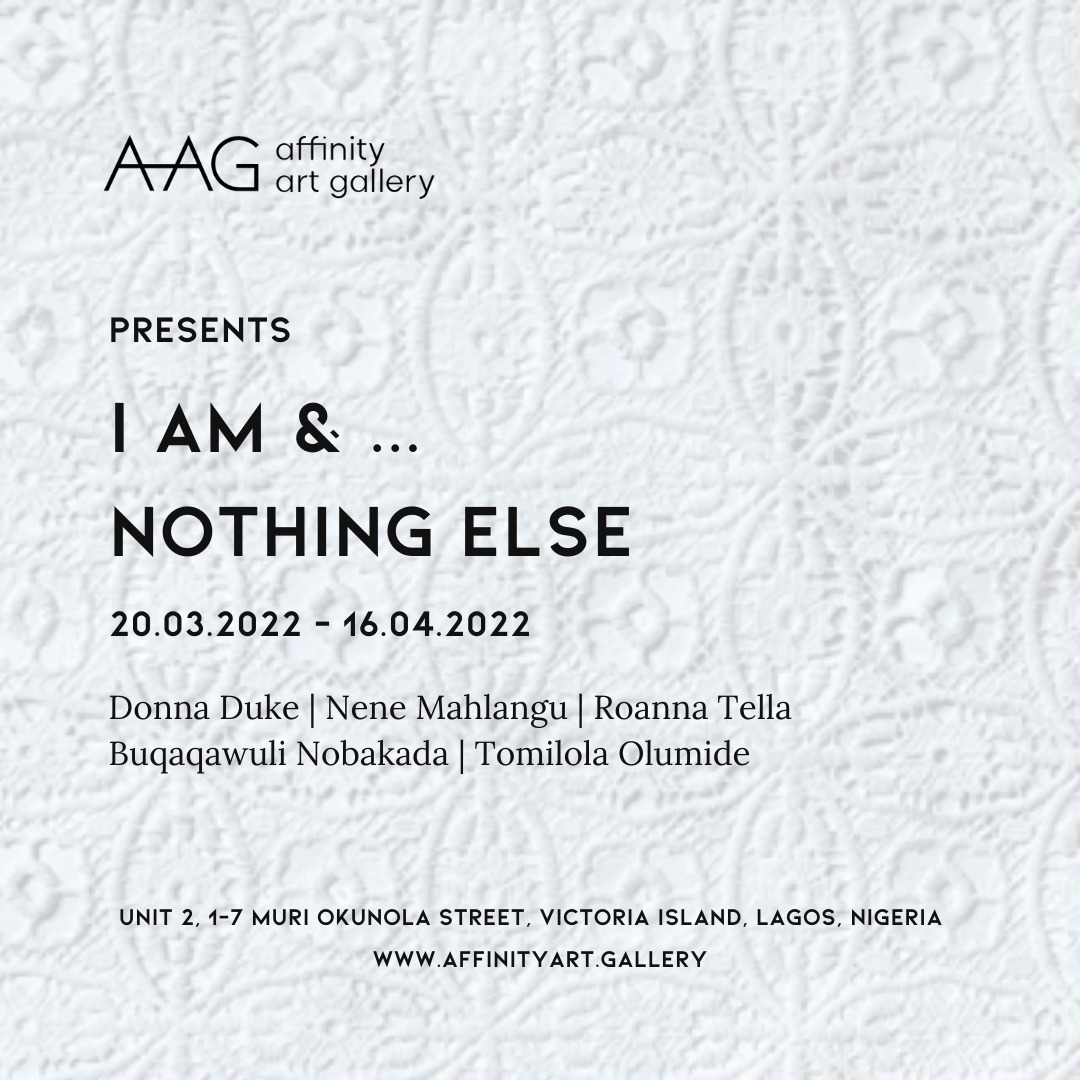 In celebration of International Women’s month, Affinity Art Gallery presents “I AM … & Nothing Else” featuring five visionary female artists from Nigeria and South Africa.

Exhibition Details
I AM & ... Nothing Else

The exhibition draws inspiration from the book “Women who Run with the Wolves: Myths and stories of the Wild Woman Archetype” by psychoanalyst, author, and poet Clarissa Pinkola Estes.

Estes who grew up in a rural village was raised on now nearly vanished oral and ethnic traditions. According to Estes, “within every woman, there is a powerful force, filled with good instincts, passionate creativity, and ageless knowledge”. As an imaginative and avid storyteller, she ventures deep into the unconscious of the female psyche to restore and communicate messages of the wisdom of female vitality using multicultural myths, fairy tales, folk tales, and stories.

The works in the exhibition engage with themes of healing, identity, community, wholeness, femininity, and what it takes to exist in today’s world as an African woman while paying tribute to past generations. The works through their materials such as lace, fabric, embroidery, gold leaf, and metal lend texture, nuance and show that African women can simultaneously embody softness, delicacy, and resiliency.

Nobakada’s works explore the connection between African women, the concept of passing down innate knowledge, and ostensibly, burdens carried through generations through moments of intimacy; reminiscent of tending to lace curtains with the female members of her family which she incorporates into some of her work by overlaying paper with lace. She posits that we exist as a unit and like falling pieces of dominoes are leaning on the strengths of those that have come before us. Olumide takes the notion further with her installation by peeling back the fabric of society to reveal layers of cultural norms that are harmful to African women. She asks pointed questions about the failings of today’s society towards African women, the roles we as individuals play in perpetuating them, and what that means for the coming generations; and offers an indictment on society while holding up a mirror to it, for its treatment of women. Finally, she issues a challenge to the audience that cannot be ignored and will leave lasting echoes.

Meanwhile, Duke takes on a more hopeful approach in her work. The piece titled “The Seemingly Submissive Dreamer”, dissects the role age-old institutions like religion have played in the subjugation of women by implanting ideas such as submissiveness, some of which were foreign to our culture, as admirable characteristics for women to embrace. Also, when the history of how institutional religion was introduced to African societies is studied, it reveals a pattern of indoctrination that leaves much to be desired. As subtle in her musings as the gold leaf she uses in her works, she presents the concept in a dreamscape and supersedes the notion of reality with the mythological.

Tella’s works also transport the viewer to the land of dreams where everything is possible and the freedoms that aren’t granted to women in everyday life can be fully realized. In her works dreams take on a double meaning. Dreams are the land of rest both physically and mentally, and also where endless possibilities can ensue. Tella wants the audience to experience both with her dazzling array of calming blues, greens, violets, and ultramarines.

Women are taught to fear the passage of time as if getting older is to be seen as anything but a blessing. In African culture, our relationship with time is a lot more nuanced and complex as it is rooted in mythologies and cultural beliefs. In Mahlangu’s works, time is welcomed and celebrated like an old friend but also held onto tightly like a favorite cousin you aren’t sure you will ever see again. It is this dichotomy that lends itself to the intensity that is so apparent in her paintings. In the end, she chooses joy and celebration over trepidation and fear, a reminder to us all to do the same.

Ultimately, all the artists in this exhibition are relaying the same message in different artistic languages; that African women deserve to rest and heal, that they deserve the freedom to be whatever versions of themselves they desire to be, free from societal expectations. They deserve to exist in the realities of their truest selves and to resist the notion that they must always be more.